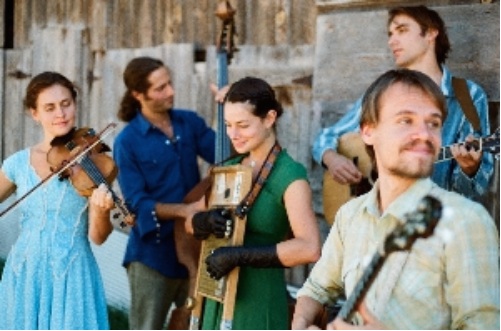 ‘This five-piece folk band from Colorado play indie bluegrass with sensitivity and mystery -And at its heart is the mesmeric Bonnie Paine, the woman with the washboard.’ – 4*  The Guardian

Elephant Revival formed on the banks of Spring Creek in Tahlequah, Oklahoma and then relocated to Nederland, Colorado in fall of 2006. The five members of Elephant Revival share a deep commitment to certain ideals: community, recognising one’s place in the flow of the natural world, harmony. Elephant Revival took its name from a news item that (multi-instrumentalist) Dango Rose had read, where two elephants that had lived together for 15 years were separated by zookeepers; within days, both had passed. The idea that one should recognise and celebrate the unseen connections of spirit that flows between all things on this Earth animates everything the band does. For a band of five individuals, all of whom contribute songs, there is a consistency in expressing those shared values. In the song from which the album’s title is culled, “Remembering A Beginning,” Bonnie Paine, one of the band’s three primary vocalists and multi-instrumentalist, sings of the unity of all things.  Adding his talents to the “natural confluence” was producer Ryan Hadlock (The Lumineers, Johnny Flynn, Gossip), who recorded the band at his Bear Creek Studios in Woodinville, Washington.

Rodriguez also penned and sings the band’s first single from the album, “Grace Of A Woman.” In this song, Rodriguez both pays homage to the physical sacrifice that women undertake that allows us all to be here, but also to the female energy, both loving and creative, that balances out the male energy that so dominates the present world, all wrapped in an infectious tune that is utterly joyous. Rodriguez, as have all members of the band, has sacrificed material comfort for the sake of the dream of playing music. After a stint as a college basketball player, he committed to music, running sound at a club (where he met Paine after a show she played there; they climbed on to the roof of the club and played music until the sun came up). After the club closed, he went west to join Paine and the other, living for a time in a truck and for a time in a teepee.

“Grace Of A Woman’ which has some electric guitar, touches the ensemble sound and eclectism of the songs reminded one of The Pentangle who could switch from folk to rock to jazz at the tip of a hat.” – Americana UK 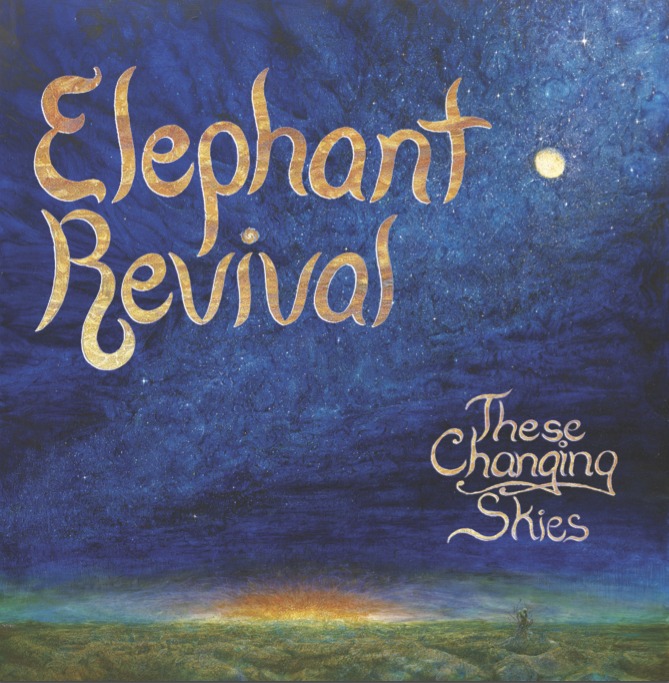 “Well worth a listen to anyone with a fondness for the ‘folk’ element of ‘folk-rock.” –PopMatters

“Thoughtfully constructed, classy and immediate, this is an album of many shades and moods.” – Songlines

“A captivating contribution to the Americana category.” – R2 Magazine

“Musically, this is a refreshing and fascinating album with a multitude of ideas and styles all integrated to make an attractive and original sound.” – Country Music People

ARE AMONG THOSE HONORED

– Rounder Records is pleased to announce that its artists garnered 6 awards at the 39th annual SPBGMA [Society for the Preservation of Bluegrass Music of America] Music Awards show held Sunday in Nashville.

Bluegrass duo Dailey & Vincent were voted Bluegrass Band of the Year (Overall) for the 3rd consecutive year and also picked up wins for Vocal Group of the Year and Gospel Group of the Year (Contemporary).  These awards come on the heels of their Grammy® nomination for Bluegrass Album of the Year, with the ceremony to be held this weekend, February 10, in Los Angeles.

Below is the complete list of Rounder Records’ SPBGMA award winners:

“They’re a blues, country, bluegrass, swagger band and they are brilliant.” ~ Adele

“Whether it was older songs such as ‘Drinkin’ Dark Whiskey’ or newer songs such as ‘Guitars, Whiskey, Guns and Knives,’ the new lineup earned the respect of the most skeptical in the crowd. The SteelDrivers are still in the running to become a crucial factor in the history of bluegrass.” ~Geoffrey Himes, Baltimore City Paper

The SteelDrivers are back! The three time Grammy® nominated bluegrass-meets-soul band has threaded the roots of bluegrass music with the distinctive threads of their own design, bringing together country and soul to create their own unapologetic hybrid of new music with the old feeling. Hammer Down, their third release on Rounder Records, is set for release February 4, 2013.

The SteelDrivers’ brand of bluegrass – intense, dark, poetic, and inescapably human – is a refreshing reminder of the timeless power of string band music, and is captured perfectly on the new Hammer Down. The band has gone through a few changes since they first hit the national scene in 2008 with their self-titled debut, but their songs and sound remain fresh and powerful.

The SteelDrivers are banjo player Richard Bailey, bass/vocalist Mike Fleming, guitar/vocalist Gary Nichols, fiddler/vocalist Tammy Rogers and mandolinist Brent Truitt. Produced by Luke Wooton, Hammer Down is a collection of 10 new tunes from original members Chris Stapleton and Mike Henderson, as well as Rogers and Nichols. The set also includes the songs “I’ll Be There” and “Cry No Mississippi” that Nichols co-wrote with John Paul White – one-half of the band The Civil Wars.

The English pop star Adele was so smitten with the band that she began performing their song, “If It Hadn’t Been For Love,” in her live performances. Throughout 2013, The SteelDrivers will be touring nationwide in the USA at clubs and festivals.