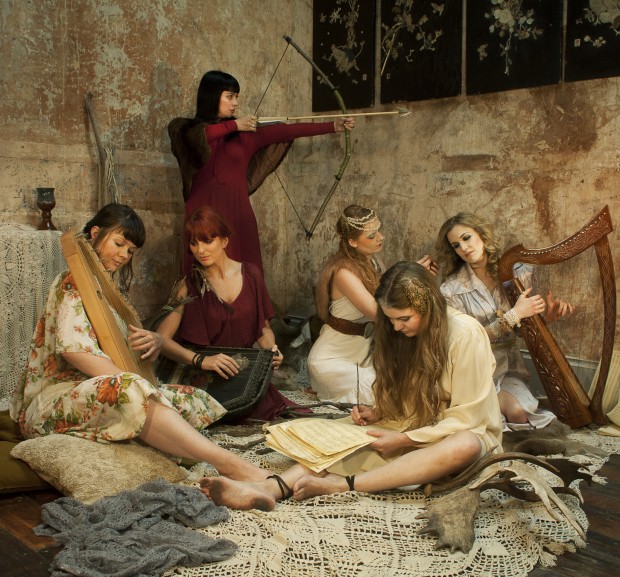 The Mediaeval Baebes first launched in 1996, when a group of friends broke into a North London cemetery and sang together, clad in flowing white gowns and crowns of ivy and since then they have gone on to have  Gold and Silver albums in the UK and a very successful career in the States where they tour annually.  Their musical lives are lived  in a demi monde of the classical, folk and indie world and they have enjoyed number one classical albums during their career.   Their latest Album The Huntress comprises 17 tracks that reflect both the traditional folk influences behind their music as much as their renowned classical songs as shown on their enchanting version of “Lenten Ys Come”.

The Mediaeval Baebes are a unique phenomenon in the musical world.  Their lyrics are sourced from mediaeval texts and then set to original scores using mediaeval and classical instruments. The choice of mediaeval texts are  dramatic, obscure and dark in topic and remark upon the inevitability of death, the pointlessness of material possessions, the horror of unrequited love or the dangers of imbibing too much alcohol.   The singing includes an impressive array of long forgotten languages and has an ethereal quality that is as powerful as it is soothing.

The Mediaeval Baebes have performed before enthusiastic audiences in the UK, United States, Canada, Asia and Europe in venues ranging from castles and caves to nightclubs and Renaissance Fayres.  They have toured with Jools Holland and played at The Royal Albert Hall, Carnglaze Caverns in Cornwall, Jersey Opera House, Tewkesbury Abbey, supported Michael Flatley in Hyde Park, and performed at the legendary Lilith Fair.   Now they will add Cropedy to this exotic list.